“Many of us live in denial of who we truly are because we fear losing someone or something-and there are times that if we don't rock the boat, too often the one we lose is ourselves...It feels good to be accepted, loved, and approved of by others, but often the membership fee to belong to that club is far too high of a price to pay.”

Codependent people feel responsible for other people’s feelings, problems, and behaviors often at the detriment of their own well-being.  They sacrifice their own emotional, mental, and physical wellbeing (and even safety) in order to sustain their relationships and take care of their partners and family members. 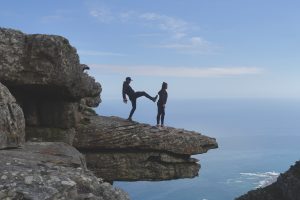 Narcissists on the other hand are self-obsessed, feel entitled and places his or her own feelings, needs, and desires above those of anyone else in a relationship, and who lacks compassion and empathy.

You can easily see why they are drawn to one another.  An extreme giver and an extreme taker.

I am a natural care-giver which can easily tip over into codependency with the right/wrong partner.  I have always “gone with the flow” which until I started working on myself was actually me being completely passive and a people-pleaser.  I wanted people to like me and so I did what they wanted rather than speak up about what I wanted.  Naturally that lead me on a collision course for a toxic relationship.

Keep in mind, narcissists can be incredibly charming. They can swoop into your life and sweep you off your feet. You can feel a connection that you’ve never felt before, as if someone finally gets and see you. The term “soul mate” is often used by both parties to describe this “wonderful” connection. They may make grand romantic gestures and make you feel incredibly special with flattery and promises of future adventures. This behavior is sometimes referred to as “love bombing.” Once the narcissist knows they have you hooked, the adoring behavior slowly but surely starts to be replaced with disdain and criticism.

How do you STOP chasing the high?

Without therapeutic intervention or behavioral dynamic changes, the cycle healing on its own is highly unlikely.

However it is important if you are a codependent who is tired of chasing and wants to break the cycle, it’s important to become self aware.  Start by asking yourself some questions:

Recognise that your passive codependency is probably present in many of your other relationships as well.  How many times do you say “I don’t mind, I’ll do whatever you want to do”?  These behaviours probably started in childhood and have become so ingrained that you may not even recognise them in other situations.  Start noticing when you are being passive.  You don’t have to necessarily do anything right now but noticing is the start of change.

When you are ready you can start to assert yourself in safe friendships. The next time your friend asks what you want to eat for dinner, tell them instead of saying it doesn’t matter. If your order at a restaurant comes out wrong, nicely send it back instead of just eating it. These small steps will build your confidence to start drawing boundaries in your relationship.

Keep practicing.  It won’t come easy at first but you can do it.  But be aware that others will probably react negatively initially because they aren’t used to you behaving this way and they may feel threatened.  Breaking the codependency cycle means maintaining your boundaries and assertiveness DESPITE  other people’s reactions which can feel very uncomfortable at first as you are so used to putting others’ needs first and people pleasing.  Putting yourself first is a new habit and one you have to be committed to practicing if you want to see change.

Do you identify as codependent?

Are you struggling to maintain boundaries and practice assertiveness. If you are looking for support post-narc, join our free Facebook support group Slaying The Narcissist

PrevPrevious7 Things You Need To Know About Family Court Before You Get There
NextEmpaths and Narcissists: An Addictive CombinationNext